Beyond… A Journey Within

On a memory trail

You can read it here: https://www.stonecropreview.com/issues/issue-3-sky/

“Look, that’s Ursa Minor! Those seven stars in a kite-like shape with a tail,” I pointed to the constellation, joining the dots with my index finger as I lay next to my sister in our cots under the gleaming night sky.

During summer vacations, our extended family used to meet in the village. Cots braided with Jute rope were put side-by-side on the terrace so that people could sleep under the blanket of starry sky. An elder would tell stories—a mix of both mythology and Panchatantra (1) tales—to the kids: a little boy who became the polestar by the grace of the gods; anthropomorphized animals, birds, and trees teaching wise conduct; and epigrammatic verses of destiny and Karma.

The moon traveled with me, matching the pace of the car. I saw a face in it. It was still now, gazing back, smiling. My grandma said it was an old lady spinning the magical yarn, knitting dreams for us. But the dark splotches of lunar maria never looked like an old lady to me, no matter how hard I squinted. Maybe my soul knew that I have to weave my own dreams.

I remembered this two-decade-old conversation while downloading a sky-map app on my phone today. It displays the luminous sky, identifying stars, planets and even nebulae above your location. All this without the need to step outside. I held the mini-planetarium in my hand. Second-hand experiences. The city’s hazy aura rarely allows for a clear view of the sky.
This wasn’t the case a decade ago. The city sky wasn’t this blurred. I could still join the dots.

As an inquisitive kid, I began identifying Orion, Ursa Major, the Pleiades, and a few others. I grasped how to distinguish a shiny planet from a twinkling star. Once, while flaunting my new-found knowledge of these sparkly orbs to my friend who lived next doors, I witnessed a shooting star. Oh, the awe-inspiring moment and the innocent wish that followed. Meteors are a dull textbook chapter; a shooting star is a quixotic poem. Meteors gratify our curious minds; shooting stars gratify our poetic hearts.

It wasn’t just the night sky that bedazzled me. The cerulean blue sky was equally enchanting. Who knew the subliminal process of finding shapes in Cumulus clouds—the fluff balls of the sky—was actually pareidolia at work. A group of birds flying around old buildings made me wonder if they were practicing ballet or playing tag. I saw them flying across the sky in a bow-shape once. No one believed me.

And somewhere amidst all the morning chirps and caws, a roaring airplane would fly by. I wondered if they could see a tiny human waving at them. I didn’t know that eventually the experience of plane turbulence would fuel my anxiety, draining away my childhood enthusiasm.

In winter, grey spills over the azure sky. Crop stubble burns and daily smoky exhaust from vehicles and factories helps achieve that. Incessant fireworks burnt to celebrate a festival signifying the beginning of winter add to the layers of smog that remain suspended in air for days. The cityscape turns into a scene out of an apocalyptic movie. The world’s news headlines have been constant for a few years: “Cities of North India worst in the pollution index”

Blame-game politics intensifies and the sale of masks and air purifiers goes up every year in the winter months. Hospitals swarm with respiratory illness; blackened lungs look for respite. Droopy plants, perplexed pigeons and crouched chipmunks are left with no choice but to inhale this soot-laden air. While the myopic vision of humans contributed to this condition, environmentalists, activists and concerned citizens of the world are trying their best to reverse the damages.

Air feels dense with apathy and avarice of few who put profits above the planet. We believed ourselves to be the rulers when we are just visitors. If I could satin stitch this on the sky, I would have, for the present and future generations. In search of better skies, I have traveled. Mountains seem to hold clearer expanses above them. How I wish I could copy, paste that image over my head once back in the city!

The only relief is monsoon season, when the grey is washed out of the sky by the rains to reveal the true color behind it. The big-wigs of the cloud community—Cumulus and Cumulonimbus— hold an annual meeting with Nimbostratus at this time of year. After brainstorming with thunderous claps and lightning bolts, the bountiful showers cool down the burned tar and tiles. Nature transforms dusty-olive to bright green. The fresh new sky above and rejuvenated plants below are unchanged over the years, thankfully. Maybe people like me coined the word pluviophile after witnessing the joy the rain brings in a place where the sun is wrathful for almost eight months of the year.

I step out onto my balcony every evening to see if the sky is willing to shine a light on me. The city lights haven’t quite engulfed the stellar night, the way they have almost consumed the fireflies that used to whisper magic chants and light up the meadows. The sky is one of the few places to look for the little magic left in the world. Nature has always been my inspiration and solace. Is it because I was raised amongst plants and bees, butterflies and folklore, wind and space? Or did the moon’s old lady knit the fabric of my soul?

It was Arcturus, the constellation. I am trying to see on the app where it is stitched in the sky.

(1) Panchatantra: is an ancient Indian collection of interrelated animal fables in Sanskrit verse and prose, dated to roughly 200 BCE, based on older oral tradition. 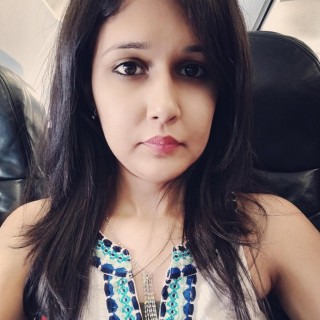 On a voyage of exploring this never-ending world of spirituality. They say it gives you tranquillity and true happiness. When I feel enveloped in calmness, I sit down to write about the serenity around me and the experiences that taught me the truest meaning of life. Find me in Science of Mind, New York Spirit, Park Slope Reader, MindBodyGreen, PranaWorld, Sivana Spirit, Saevus Wildlife Magazine and more.

Unauthorized use and/or duplication of this material without express and written permission from this site’s author and/or owner is strictly prohibited.

Utmost care has been taken while posting the relevant images on this website. Either they are taken from free images or after acquiring permissions. However, if there is an image appearing on this website that belongs to you and you do not wish for it appear on this site, please E-mail with a link to said image and it will be promptly removed. Images on this blog are copyright to its respectful owners.
Loading Comments...
Comment
×
<span>%d</span> bloggers like this: